&nbsp;Whitetop Mountain is the second highest mountain in the state of Virginia, after nearby Mount Rogers. It is located at the juncture of Grayson, Smyth, and Washington Counties in the state of Virginia. Whitetop was the location of the Whitetop Folk Festival from 1932 to 1939, with the exception of 1937. The mountain is also unique for the fact that it represents an ecological &quot;island&quot; of flora and fauna commonly found much further north than Virginia, such as old growth red spruce and other northern softwoods. 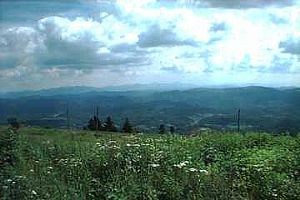 It towers above the slopes that plummet down toward Damascus, and is connected by a wide ridgeline to another of Virginia&#39;s few 5,000 foot peaks, Buzzard Rock.

This peak is also home to the highest auto road in the state, a well groomed gravel track that leads from Hwy 600 to very near the absolute summit. The summit provides panoramic views of three states; Virginia, North Carolina, and Tennessee. &nbsp;The very top of the peak is clothed in a very healthy spruce-fir forest that, like the one on Mount Rogers, was spared the wooly aphid infestation that, along with the weakening effects of acid rain, denuded the highest peaks of the Southern Appalachians in North Carolina during the 1980s. Also, there is a highly visited hiking trail called the Creeper Trail which starts at Elk Garden on Virginia 600.

Whitetop Mountain, like the nearby Grayson Highlands, also has prime examples of high country meadows we commonly refer to as &quot;balds&quot; in this part of the country. The views from these meadows, just below the summit ridge, are among the finest in the Southern Appalachians. From these peaks, one can stand and view such notable summits as Grandfather Mountain, and see the slopes of the Ski Beech resort far off in the distance.

Most people only get to dream of owning a Home in the Blue Ridge NC Mountains, but more and more folks are finding out that their dreams can come true. Currently, we are seeing some of the lowest loan rates and prices on real estate than any other time before. For many it is now possible to purchase a second home in the mountains. Begin looking for Blue Ridge Mountain Real Estate from our website (www.a1mountainrealty.com) or stop by our office located in downtown West Jefferson NC.&nbsp; As a High Country Real Estate Company based in West Jefferson we are familiar with real estate prices in Ashe, Alleghany, Wilkes, and Watauga Counties. We can represent you if you are looking to purchase Blue Ridge Mountain Homes.

Thank you for taking the time to read our blog!